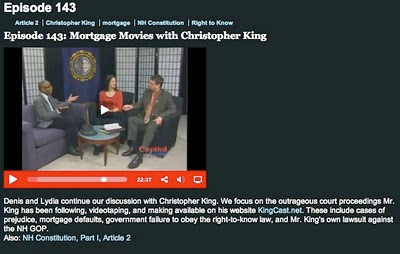 It is here: http://nhcaptv.com/episode/143
My in-studio video version (with other footage) is here:
http://www.youtube.com/watch?v=WxwLf31QfHE
Our first project video is on the first post of this journal and may be viewed here:
http://www.youtube.com/watch?v=JfiwDBjCt9A
Bonus: Today's LA Progressive feature by Marian Wang.
Posted by Christopher King at 7:53 AM No comments: 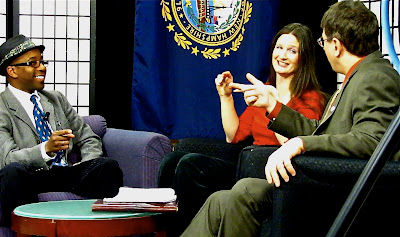 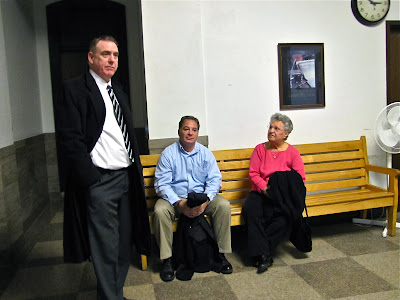 More pics and a KingCast movie tomorrow or Friday, but I'll say this:
On the show (a double feature airing this weekend and next) we talked about Mortgage Movies Journal. It was Good. Damn Good.
PS: Scott Hyman v. Hemlock Association defense attorney Richard Serkey put his regal foot in his mouth and gave KingCast left-handed praise when he reportedly cried "Mr. Hyman used the media to his advantage," in fighting the verdict in today's JNOV/New Trial hearing. He didn't like my blanket coverage, especially this movie , in which I note that FOX 25 jumped ship and even claimed they didn't have their first broadcast from when someone torched his house. I had a copy and used it in the movie. Also, the problem is, I'll show you my phone records, I telephoned Attorney Serkey but he had no comment, so to hell with that notion. Pshaw, I even put a good picture of him in one of the movies, I'll find it tomorrow.
Posted by Christopher King at 8:11 PM No comments: 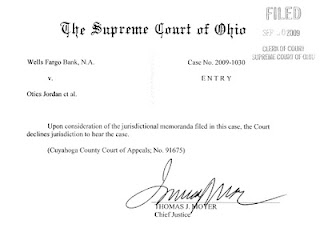 Bada-Bing!
Posted by Christopher King at 5:29 AM No comments:

Posted by Christopher King at 9:47 PM No comments: