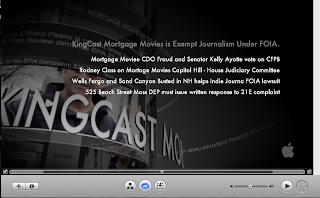 Dear Attorney McLeod: As noted in my Sunday, 20 May 2012 Mortgage Movies Journal entry and per our telephone conversation, I have provided you a draft copy of my Federal FOIA lawsuit and just four (4) of approximately eighty (80) Mortgage-related movies I have made since I launched that past approximately fifteen (15) months ago. Note the following, with no paid advertising or promoted videos whatsoever:


As you can clearly see I have been addressing salient legal issues with camera in hand, and with the knowledge bases in my background that include assistant attorney general, licensed title insurance producer, land use zoning manager, notary and former editor and writer in mainstream press. If I am not an exempt journalist under FOIA then nobody is. In the top movie at the link above you can clearly see that I was reporting on the Sand Canyon fraudulent/non existent mortgage assignment that Judge Joseph LaPlante recognized in denying Wells Fargo Summary Judgment last week. As to why Judge Paul Barbadoro refused to see that issue last year I cannot say but that's just the way he votes, historically pro-bank and pro-law enforcement almost every time. Yes I have studied that, would you like the statistics or is that necessary as well? I thank you in advance for your reconsideration of the initial denial.
****************
Dear Mr. Johnson, as referenced per our discussion last week herein please find copies of the signatures of the property owners on the fraudulent Zoning application. Again, said successful application (in December, 2011) willfully and intentionally omitted the FACT that the owners, the developers and City Council Ira Novoselsky were all aware of actual contamination in May/June, 2011 yet no one informed Site Plan Review or Zoning until I started asking questions with a camera. The law as noted in this journal postincluding your own 2012 cited case of In re Knott, Docket No. 2011-011, PAN-NE-11-3R001 ($10,787.00 fine for failure to report TCE, affirmed) is crystal clear: The owners and developers were working in tandem, exercising full joint and several control over the subject property. I look forward to a timely written response to the Complaint filed by abutter Clifford Pisano and me now that the Complaint is complete. We have done all of your agency's homework for you and put it right on your plate.


To all: Enjoy the Holiday weekend, and remember that our Veterans fought and died, allegedly to preserve the Rights that I enjoy daily on my journal pages and on my YouTube channel, regardless of who likes what I have to say. That my friends, is the moral of the story. 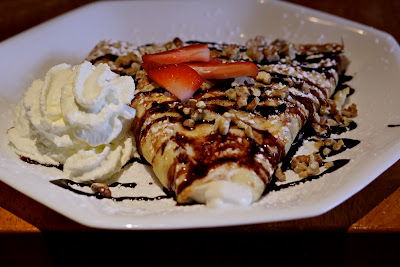 Bonhoeffer's is so damn good it could make it in NYC or anywhere as The Chairman would say.


Q.  What does a Bonhoeffer's strawberry and creme crepe with chocolate drizzle and walnuts have to do with Kelly Ayotte, Michael Delaney and mortgages?


A.  You will find out soon enough. 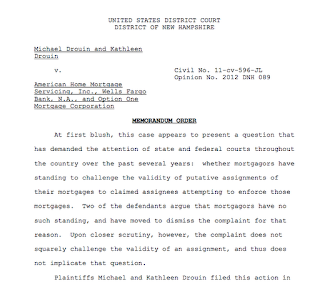 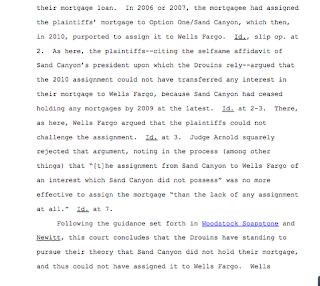 This case supports everything I've been arguing to the U.S. DOJ about my status as a journalist exempt from payment of FOIA fees as noted in yesterday's journal entry. NH District Court Judge LaPlant recognized in Drouin v. AHMSI, Wells Fargo and Option One (NH Dist 11-CV-596) that Sand Canyon did not exist and could not have Assigned ANYTHING, as I noted more than a year ago in the Jeanne Ingress NH cases where Judge Diane Nicolosi played dumb and allowed Wells Fargo lawyer Shawn Masterson to provide hearsay testimony about having the original documents "in his desk." Selected clips are provided in this dual-purpose  documentary short film that will be posited with the DOJ later this week as a Motion for Reconsideration to DOJ Counsel Janice Galli McLeod. Query, will Judge Paul Barbadoro ignore this precedent from his Brethren when Ms. Ingress mounts this argument later this week? Will there be a split between judges in the same single District? The mind boggles.

KingCast/Mortgage Movies: We know exactly what the hell we are talking about.
Posted by Christopher King at 3:45 PM 4 comments:

20 May 11:22 update -- At 9:33 am the DOJ viewed the picture below wherein it is proved that media lawyers and the Boston Herald consider me a journalist and member of the media on my own accord, by name. Honestly, the nonsense and abuse I have to go through just to be a responsible member of the Fourth Estate is mind-boggling. Stick around for tonight's movie about the ongoing Wells Fargo Sand Canyon issues I have been journalizing for well over a year now in the Jeanne Ingress cases, one such video being hosted on Real Estate News 247 open forum. Well just last week Wells Fargo's Motion to Dismiss was denied in a Federal Case because the Plaintiffs are free to argue the issue that Sand Canyon could not have assigned that which they did not have. Ms. Ingress and I have been saying the same exact thing for months. See the thumbnail read the case Drouin v. AMHSI/Wells Fargo/Option One 11-CV-596 and quit giving me a hard time or I'll sue and it's not going to be pretty. 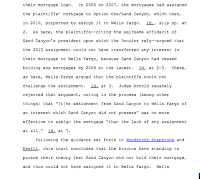 20 May 11:22 update -- Attorney McLeod returned my phone call. She will reconsider after I submit more material. She is trying to put me into the freelancer status where my material is republished by other press but that is not my point. My point is that I am covered by the statute on my own merits. "What I do is no different than what I did as an editor or reporter for the Call & Post or Indianapolis Star 20 years ago even if it has more opinion in it... a luxury that I am not afforded by major press."
Lawsuit KingCast Mortgage Movies v. DOJ in FOIA 5 USC §552(a)(4)(A)(ii) Press Exemption Dear Attorney McLeod: I am in receipt of your letter dated 16 May 2012 and politely decline to pay the requested fees for any and all documentation showing where NH U.S. Bankruptcy Trustee Lawrence Sumski has ever challenged a B10 Proof of Claim relative to foreclosure, as many U.S. Trustees have done. Instead you can check to see if that is your Final Answer, and if indeed it is you can prepare to come to Federal District Court in Boston to explain how and why you completely ignored the following facts, law and issues. I wish I could sue you individually but Pickens v. DOJ 2011 U.S. Dist Lexis 69829 has apparently disposed of that issue last year. Odd that it wasn't raised in Covington v. McLeod, 646 F Supp. 2d 66.


1. The U.S. Department of Justice, by and through Attorney Janice Galli McLeod, on 16 May 2012 issued an arbitrary and capricious determination that Plaintiff was not a journalist within the meaning of FOIA/552(a)(4)(A)(ii), finding that the materials provided are largely commentary. In so doing Attorney McLeod willfully ignored every issue identified below in paras. 2 through 15, inclusive. See Plaintiff's Appeal and the 16 May letter at Exhibit 1.
2. There is no "commentary" exception involved in the language of 552(a)(4)(A)(ii) of title 5, United States Code as seen below. Nor is there any such restrictive language included in the case law of the forum state which governs these proceedings because the Federal Scheme may not afford less Constitutional protections than the particular State. Relevant excerpts are also seen below.
3. Prior to matriculation from Case Western Reserve School of Law Plaintiff earned a Bachelor's Degree in Communications with an emphasis on news writing and studies in 600 level Rhetoric courses.
4. In fall of 2010 NH U.S. District Magistrate Judge Landya B. McCafferty made an express finding of fact that "Plaintiff is an African-American journalist" in Case No. 2010-CV-501.
5. As to prior publication history, Plaintiff has edited a large statewide weekly newspaper, the Ohio Call & Post.

6. Plaintiff has written for the Indianapolis Star, note that the issue involved in that 1990 feature involved illegal wireless phone surveillance, the very same issue currently implicated in the FOIA lawsuit of Electronic Information Privacy Information Center (EPIC) who is being copied on this journal entry. Plaintiff's Lexis inquiry yields EPIC v. FBI, DC Dist. 2012-CV-667, which also denied media status. That is how the government operates when it wants to hide something but it is illegal.
7. Plaintiff has co-hosted a radio show in Boston, Massachusetts. 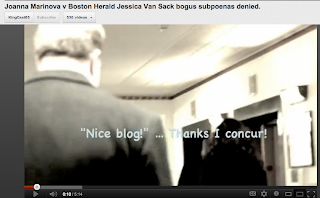 8. Plaintiff was recently subpoenaed as a journalist (Motion to Quash granted) by the Boston Herald as noted by the Parties in Joanna Marinova v. Boston Herald, Suffolk Superior 2010-CV-1316. The Herald's Attorney even stated "nice blog."

How can anyone trust Henry Fein's ethics when you have a name partner at a major foreclosure mill using fake documents by Bethany Hood and Lender Processing Services and lying about his identity? Truly unbelievable. Here is your back story.

Posted by Christopher King at 12:55 PM No comments: