KingCast and Mortgage Movies Say Witnesses Must Come Forth in Pending Disciplinary Hearing Against Attorneys Burson and McDowell for Foreclosure Acts in Violation of Emergency Rule 14-207.1, Same as Thomas P. Dore! 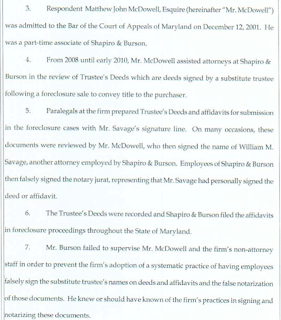 Remember last week how I showed you where M&T Bank and their lawyer basically hand-picked Judge Mickey Norman to slam a homeowner as Norman completely lied about the reason for Emergency Rule 14-207.1? If you don't well the video is embedded below. He's a real bully and intellectually disingenuous but he can't outsmart me with his lies. Well as a pesky reporter (and former State Attorney and title insurance producer) I am ever so proud to inform you that there's more (including a new video by Monday) coming:

There's an upcoming trial in Montgomery county (MD) in July for the court to decide whether to disbar or the appropriate level of sanction for John Burson and Matthew McDowell over practices similar to that of T. Dore. Below is the complaint filed by the MD Grievance Commission. MD Griev. Comm's attorney, James Butlok (410-514-7051). Homeowners must demand they participate as witnesses/damaged parties to the practices of Shapiro and Burson and contact whistleblower Jose Portillo and email me at kingjurisdoctor@gmail.com to document the fact that you called. From Paralegal whistleblower Portillo:
*************

The purpose for me reaching out to you is to share upcoming events similar to that of the Thomas Dore case, only this time it deals with attorneys from Shapiro and Burson, another foreclosure attorney in Maryland.  As, you may be already aware (or not), in June 2011, I filed a complaint (attached) with the MD Grievance Commission (MDGC) against attorneys:  William M. Savage, Matthew McDowell and John Burson.  The attorney moving the case is James Botluk (James.Botluk@courts.state.md.us) from MDGC –410-514-7051.

As a result thus far, William M. Savage was reprimanded by MDGC on the grounds of, “Commission Reprimand for his participation in a situation in which his name was signed by another lawyer employed with the firm, by permitting the execution of documents in his name when not personally signed by him and for failing to sufficiently protect against such activity.”  Basically, Savage took the “easy” way out.

In regards to Shapiro and Burson  - - John Burson and Matt McDowell, a 3-day trial (attached) has been set to be heard before Judge Bernard on July  8, 9 and 10th.  And from what I understand of it, it is for the judge to determine whether they should be set free on the charges or be disbarred.......The information against Burson and McDowell, I have to produce and testify to (as I shared with Mr. Botluk) is so devastating and damaging........


See, my point of view on the Dore case the MDGC carried out (though successful to a degree) lacked witnesses to make their case stronger.  And it is my belief the reason Dore has been able to continue to play with the Court.  However, in the case of Burson and McDowell, the MDGC will have witnesses.......

I strongly feel homeowners foreclosed on by Shapiro and Burson should be included as witnesses in this trial.  I think Judge Bernard would love to hear their stories.  And Mr. King, let me tell you, some of these homeowners cannot finish their story without breaking down in tears.  I have spent many hours listening to the stories some homeowners such as Pam, Jean and Elaine, have to share.  Stories of being displaced from the home they loved, money they spent on attorneys that made no difference, marriages sometimes extended to a point of falling apart, and above all; knowing their homes were taken from them by way of malpractice... [snip].

Posted by Christopher King at 6:02 AM