Whoa boys and girls watch who's watching... the Baltimore County Government and the U.S. Patent and Trademark Office. There's some dirty doings going on for certain.

Whoa, watch this boys and girls, I see a lawsuit and public policy issue arising shortly. And others have audio where the Judge admitted she had an Oath of Office to George McDermott after he questioned why she struck his appearance as Next Friend to the Grievance Commission. This does not appear on the audio so as such we have a valid reason for posting the audio along with Mr. McDermott's Affidavit, and I am going to telephone Attorney Botluck on this issue and record it with my re-issued Rode SVM.

This happened along with a taped call to the Administrative office on 30-31 July 2013.

There's going to be a lot going on now.

sorry, but this was sent to me:

NOTE: The Technical Services Department provides electronic recordings of Circuit Court proceedings for the limited purpose of verification of testimony. Any broadcast and/or copies made of an electronic recording is strictly prohibited by law and Administrative Order of this Court.
and thus removed. 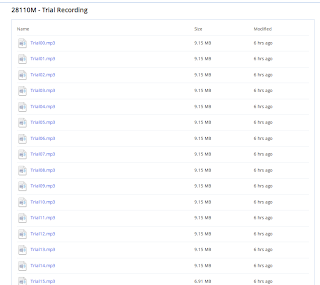 Oh it's all coming in the next several days. Recall that I may be the only journalist to have posted the actual complaint against these attorneys. I have many files to upload but I have all of the hearing. For now brush up on the 8,000 fraudulent deeds circulating in Maryland, a state that recently held the dubious distinction of having the highest foreclosure rate in the Country, thanks in part to Judges like Mickey Norman, who lie from the bench about material issues such as the purpose behind Emergency Rule 14-207.1 as drafted by responsible jurists including Judge of the Year Alan Wilner. It is a complete cesspool run by M&T Bank and I told Attorney Botluck that Stanley Reed and John Burson are all inexorably tied to Thomas P. Dore and that until these lawyers and Judges like Mickey Norman are permanently put out of business there will be no Justice in Maryland foreclosure cases. It's as simple as that.

KingCast and Mortgage Movies Present: 2013 Ill. App. Unpub. LEXIS 1412 -- Another Mortgage Victory for the Homeowner in Illinois..... No Firsthand Knowledge! 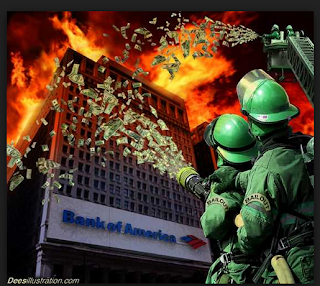 This in addition to Bank of America taking body slams in Texas and Colorado litigation. Note however that Neighborhood Lending Services v. Henderson 2013 IL App (1st) 121374-U, *; 2013 Ill. App. Unpub. LEXIS 1412 (June 28 2013) is unpublished, as most of the homeowner victories are. I learned a lot of bullshit in law school but one thing that a cool professor told me was that The System tries to hide and to minimize cases that are good for the little people. I see it all the time. Not to discourage judges from doing the right thing, but at this point why should I pull a punch. The banks and their dirty lying attorneys like Shawn Masterson don't. This is the Wild, Wild West folks, and I am just Your Humble Narrator.
Posted by Christopher King at 7:43 AM No comments:

KingCast and Mortgage Movies Celebrate as Bank of America Slammed to Settlement in Texas and Sued in RICO in Colorado!

Also a new lawsuit is coming, Rob Somerton and his attorneys are gathering empirical pattern and practice evidence:

22 hours ago
GOOD MORNING AMERICA
Our attorneys are exploring a new lawsuit against Bank of America over mortgage fraud, they've ask me to handle the initial intake because of my extensive online social network. They're asking for a ONE page description/timeline of YOUR Countrywide/BoA Modclosure (modification/foreclosure) experiences. We are taking in stories from all 50 states, still working out the parameters/details.
Folks can pm me here on fb or e-mail
Rob - rpsomerton@gmail.com — with Lainey Hashorva and 50 others inUnited States. 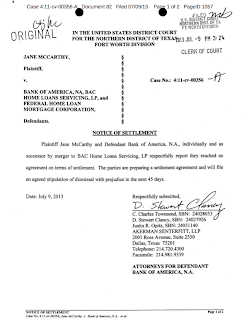 Note: In the above thumbnail see how the Chicago Tribune is reading along about the corruption in Maryland. Not the first time they have followed me; my idol Mike Royko wrote not one but two stories about one of my First Amendment Tattoo cases when I was a practicing Civil Rights lawyer. Today they were reading this journal entry and that journal entry about twice-sanctioned Teflon Don Thomas P. Dore.

Note: I have downloaded all the relevant docs from Pacer and will post by tomorrow morning. The video is not directly related to either of these cases but serves as a good primer on the over-arching aura of skullduggery practiced by Bank of America.

The Plaintiff-based Seattle law firm of Hagens, Berman, Sobol & Shapiro (no relation to THAT Shapiro, ahem) has sued in RICO in the Colorado case of George et al. v. BoA and Urban Settlement Services 13-CV-01819 PAB/KLM. The scope of Bank of America’s illegality vis a vis America’s mortgage crisis knows no bounds. Just this month a class action lawsuit was filed in Colorado because of Bank of America’s systemic fraudulent conduct:


The complaint, filed in U.S. District Court in Colorado on July 10, alleges that Bank of America masterminded a scheme which allowed it to deny help it had promised to give thousands of its customers in exchange for $45 billion it took in bailout funds.

“We believe that Bank of America gamed the system, perpetrating a fraud on both its customers and American taxpayers,” said Steve Berman, managing partner of Hagens Berman and one of the attorneys who filed the lawsuit. “BofA promised that it would work with homeowners to modify their mortgages under the HAMP program. Instead it took $45 billion in taxpayer money and fought as hard as it could to avoid granting modifications, squeezing every last dollar from its customers and wrongfully foreclosing thousands of people’s homes in the process.”

………..As the United States Supreme Court so clearly explained approximately 140 years ago:

KingCast and Mortgage Movies Celebrate Cloture Vote on Richard Cordray but Warn that NeoCon Kelly Ayotte is Still to be Watched.


As noted in this August 2011 journal entry my former Ohio Attorney General co-workers Kent Markus and Richard Cordray will indeed be the head men in charge at the Consumer Finance Protection Bureau. As noted in today's NPR story today's 71-29 cloture vote puts the issue to rest. The best quote from a comment in today's story is entirely true of neo-Con Junior Senator Kelly Ayotte from New Hampshire:


Unfortunately Republicans are not opposing the CFPB on the right principles. They should oppose it because it will become just another cronyist, revolving door bureaucracy that will create more problems than it solves. Instead, they are opposed to it because they simply do not want anyone looking over the shoulders of their buddies in the financial industry.

Indeed. When Kelly Ayotte was NH AG she allowed the largest consumer fraud scam in the State's history, and it related to what? 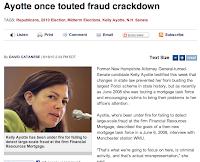 This despite the fact that she founded a so-called task force for mortgages. Here's the press release to an event that returned nothing. The folks at Politico, who ran a half-assed story about my lawsuit against her even knew that much. She's such a complete ass-hat it defies description, and the fact that I as a former Assistant AG know her game inside and out made her and John McCain lock me out of her publicly-advertised events on the campaign trail. Sure the Courts let her get away with it, but that's all the more shame on the system, not me. I'm just your humble narrator. Now watch me in these two movies at top narrate with Kelly at New Hampshire town hall meeting where she stumbles while facing an elderly constituent and yours truly, and watch me in action at her Washington office where I lay it out for her staff.


We have ordered the full audio transcript but for now you may recall this journal entry noting the ongoing nature of various disciplinary proceedings in Baltimore, MD relative to foreclosure fraud.

Well I just got off the phone with Attorney Botluck and he confirmed that Defense Attorney Stanley Reed did question Mr. Portillo about me and what materials he provided to me in addition to the information about the 8,000 bogus, forged and/or fabricated Deeds and Affidavits used to foreclose on Maryland homeowners. Suffice it to say that I told him all about hand-picked Micky Norman lying about the purpose behind Emergency Rule 14-207.1 and I told him about the thugs who appeared at Kathy Weaver's home this week faking a phone call to Ms. Weaver as they attempt to throw her out on the street.

What happened was that they made a phone call to a woman was was not Ms. Weaver and pretended to talk to her as the woman on the other end of the phone pretended to tell them that she wasn't home. This is similar to the conduct in which a process server lied about the Wetzelberger family being combative and threatening when in point of fact they were not even at home on the day, date and time in question.

The Weaver foreclosure is another Thomas P. Dore foreclosure, of course.

The Wetzelberger fraud closure is another Thomas P. Dore foreclosure, of course.

Much more on this soon, but for now please note that once you get away from Maryland, courts are much less likely to accept M&T Bank's heavy hand. See the Remand smack down delivered in Crockett v. Mutual of Omaha and M&T Bank, 12-CV-0779 out of Tennessee. This is because of Vernon Boozer, Thomas P. Dore's partner in crime. Boozer was in Md. Senate for 19 years and he is no doubt behind scenes working all of this including cover up of Dore's crimes since he is personally liable as a partner of the firm it's blatantly obvious and these judges are covering for all of them. 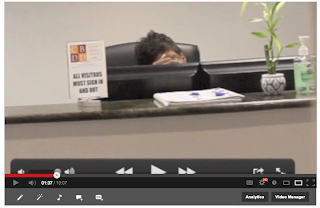 Watch the step and fetch it negro receptionist working hard for Massuh Dore in this video, trying to make herself invisible and to deny that Mr. Wetzelberger and I are in the right office. Note further that my sources indicate that Steve Kilar -- who apparently had to be forced into posting one of my comments about Thomas P. Dore in the Baltimore Sun -- was not present for Jose Portillo's testimony that these scumbag attorneys basically told him to violate the law and knew full well that they were violating the law. Attorney Botluck and his crew have a lot of work to do. I suggest we send him a gross of Lysol and a mop for starters.


Posted by Christopher King at 8:53 AM 3 comments: