King v McKenna et al. Rule 59: More First Amendment Lies by Judge Robert B. Young Besmirch the Legal Commu...
This guy is out of his Judicial mind. He just doesn't give a rat's ass about that law and that's sad because he threw out my First Amendment Constitutional claim to shoot Betty Lou McKenna's public office areas on an improper analysis as even the Defendants admit:  This is not a public meeting/public body analysis.  He then flat out lied about Pomykacz v. Village of West Wildwood and Iacobucci v. Boulter cases to claim that they were not decided on First Amendment Constitutional grounds, but again, Federal Judges in NY and Pennsylvania say otherwise, in 2015 even, see below. He then refused to allow Common Law or Statutory claims to proceed as well, even as Federal Judges all around him are deciding cases using the exact same case law. See Attorney Eugene Volokh's feature, infra. 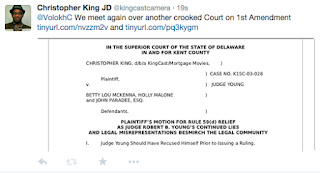 But now I know why the Defendants knew that they didn't have to settle the case.  Here is the excerpted first part of my Rule 59 Motion, which as you can see in the Scribd document is followed by my entire Motion to Recuse that was docketed on 21 August 2015 BEFORE he threw my case out on 26 August 2015.  Here's what I told them in an email:

How many lies can one Judge tell in one case? And he still has not ruled on my Motion to Recuse, which was filed PRIOR to his 24 August 2015 Decision that isn't worth the paper it was written on.

Next time I train a puppy I'll line her cage with it. .
The overnight is out to the Court today.
Ciao.

....One way or another I will teach Delaware a First Amendment lesson it won't soon forget because those very same cases you will see below define the parameters of when and why police can arrest bystanders who criticize their actions. Keep this in mind as you watch the Joe Biden/Jack Markell/Matt Denn legacy video in the Terrence Fletcher police shooting journal entry.

In the first instance, Judge Young ruled on all pending Motions on 24 August even though a well-tendered Motion to Recuse had been filed on 21 August. Said Motion is repeated in its entirety below as it provides sufficient reason for the Court to Alter or to Amend the Judgment.[1]

B.                  The Court Employed the Wrong Analysis After Unlawfully Truncating Discovery.
In said Motion Plaintiff highlighted how the Court ignored law and made up facts not in the Record to help Defendants, all the while ignoring the fact that the case should have been heard on a Summary Judgment basis. The Court noted in its 24 August Judgment that there had been "minimal discovery" but that is not Plaintiff's fault, no Sir. That is because this Court, by and through Judge Young and/or Commissioner Freud truncated discovery without Plaintiff even being allowed to determine what policy or authority Defendants relied on to determine he was not permitted to run video anywhere in the public areas.
Again, such public areas DID NOT include "interior offices" or "employee cubicles as provided by the Court.[2]

C.                  The Court’s Willful Misreading of Relevant Case Law is Astounding.
Next, the Court’s continued willful ignorance of the fact that Whiteland Woods is inapplicable is astounding. As noted on several recent occasions, including the Motion to Recuse, even the Defendants acknowledge that the public meeting analysis is not proper because Plaintiff was not at a public meeting before a public body. He was instead engaged in conduct most similar to the Pomykacz Plaintiff, who cleary WAS engaged in Protected First Amendment Conduct, so Judge Young who stated otherwise in the 24 August ruling is a complete liar who should be DISBARRED:
Here it is again, as Judge Young and the Defendants seem incapable of digesting that which they don’t like:
**********
Moreover, also out of unlawful bias and hegemony, Judge Young ignored Pomykacz v. Village of West Wildwood as well, a case in which a citizen journalist was protected by the First Amendment after shooting police personnel at the police station at all hours of the day.
Pomykacz was a self-described “citizen activist” who expressed concern that a suspected romance between the town’s mayor and a police officer were leading to nepotism, conflicts of interest and preferential treatment. These suspicions led Pomykacz to “monitor” the two, which included taking photographs. Eventually she was arrested on charges of stalking, though the charges were downgraded to harassment.

Pomykacz ended up filing suit asserting, among other things, that she was arrested in violation of the First Amendment retaliation for her monitoring activities

On the night of October 7, 2002, on her way to Wildwood, Pomykacz drove past the borough municipal building and observed Officer Ferentz working on renovations while she was on duty. Later that night, after Pomykacz had returned from Wildwood, she photographed Officer Ferentz in the police headquarters.

Additionally, Pomykacz has put forth sufficient evidence to defeat summary judgment with respect to the second and third prongs of her First Amendment retaliation claim. She has put forth sufficient evidence that Officer Ferentz and Mayor Fox intentionally misrepresented the facts of the case in order to effectuate Pomykacz's arrest. The facts surrounding the incident, viewed in a light favorable to Pomykacz, give rise to a reasonable inference of causation.

Officer Ferentz and Mayor Fox are also not entitled to qualified immunity with respect to the First Amendment retaliation claim. A reasonable official would know that arresting someone in retaliation for engaging in protected speech violates clearly established rights.

Again, more of the same with regard to Iacobucci and Judge Young lying about that case:

Boulter's repeated demands that Iacobucci cease recording do not change the disorderly conduct calculus. A police officer is not a law unto himself; he cannot give an order that has no colorable legal basis and then arrest a person who defies it. So it is here: because Iacobucci's activities were peaceful, not performed in derogation of any law, and done in the exercise of his First Amendment rights (emphasis added lest the Court and Defendants miss it again) Boulter lacked the authority to stop them. Id at 678.

In so holding, the First Circuit found that "Iacobucci's activities were peaceful, not performed in derogation of any law, and done in the exercise of his First Amendment rights." Id. at 25.

But that’s not all. Yet another East Coast Federal District Court Judge offers stern rebuke of Judge Young’s “analysis.” See Higginbotham v. City of New York, 2015 U.S. Dist. LEXIS 62227 (May 12 2015)(The Right is "Clearly established" -- My buddy Eugene Volokh and the Washington Post get it).

By November 2011, the First, Ninth and Eleventh Circuits had all concluded that the right exists. So had a number of district courts. See Pomykacz v. Borough of West Wildwood, 438 F. Supp. 2d 504, 512-13 (D.N.J. 2006) (denying summary judgment in a First Amendment retaliation claim involving a plaintiff who was arrested for repeatedly photographing a police officer)……..

D.                  Conclusion and Prayer for Relief.
This Court is going to do whatever it wants to do in order to satisfy the corporate and State interests at stake here, let that be clear: Mere words cannot convey the realm of injustice set forth by Judge Young and Commissioner Freud.  All of Plaintiff’s Claims should proceed toward trial, and all of his First Amended Complaint should have been considered but was not, because of unlawful bias.   Plaintiff was unlawfully denied by a rogue Judge with a mission to suppress any and all relevant facts and law. It doesn’t get any clearer than this.  Whatever happens or does not happen in the future history of this case, anyone reading this Motion and Memorandum will see the Truth about the racist, culturally hegemonic and oppressive bench and general aura of racism that taints the entire state, as noted in Plaintiff’s most recent video,

[1] Moreover, as of 2 September 2015 there is still no ruling on the Motion to Recuse.
[2] The reason why Judge Young lied about this is set forth below, and Plaintiff provided an uncontroverted drawing to buttress his argument.
[3] And with respect to the man who was arrested in said video for questioning why Dover DE police shot at Terrence Fletcher in a school zone: http://www.delawarepolitics.net/the-shooting-of-terrance-fletcher-by-dover-police-justified/
Plaintiff will be producing another video for him encouraging him to seek counsel who is not afraid of the Delaware Juggernaut in light of the law set forth Killingsworth and Gaymon v. Borough of Collingdale, 2015 U.S. Dist. LEXIS 93014 (July 17, 2015), infra, noting that it is clearly lawful to video and to criticize public officials, just as in Glik, which Judge Young also ignored. The gravamen is simply whether or not the videographer is unreasonably interfering with official business, period.
Posted by Christopher King at 4:55 AM