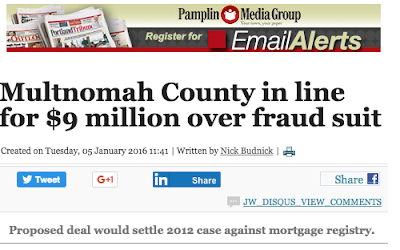 6 Jan 2015 Update -- And there it is, folks.... Multnomah County v. MERS et al.... a $9M settlement against MERS in Oregon proving that our claims and arguments have substantial merit. (The problem is that it's an illegal agreement because it allows MERS to carry on with its well-established illegalities.... )The firms originally filed the case as a $38 million lawsuit against Mortgage Electronic Registration Systems, Inc. and its parent company MERSCORP Holdings, Inc. The county last May filed an expanded suit accusing MERS of fraud and seeking damages of $160 million.......

Tune in 6pm Thursday 17 Dec. 2015 Eyes on Washington (The Answer 1590) for an hour of conversation with Doug, Marty, Marie and Yours Truly.

At this point we are going to close this thread and move on to the new one here as we address the City’s rejection of Marie McDonnell (2014 CV) and her reviews by working to bring her to Seattle on our own accord. The Press release reads as noted on the new page. The top video is my trailer for the December 13 Event at the scene of the 2013 Foreclosure and Underwater Home forum conceived by Yours Truly and several housing advocates and attorneys and attended by 6 of 8 Seattle City Council Candidates. The second video is the Seattle Project overview produced by Fred Popke and Marie McDonnell.

The fact that the City refuses to fully embrace transparency is troubling: They requested confidentiality from their own consultant who was engaged to study public documents. They redlined her documents and would not allow her to simply state exactly what she stated to the Jury in Wolf.

Above is the full hallway video in which anyone can see and hear that Nick Licata is feeling a heavy hand from certain attorneys (and others) as he and I discuss the city reneging on its commitment and promise to bring Marie McDonnell in to present her MERS audit findings to City Council:

WTF... why NOT? She just testified successfully on a $5.4M Jury trial and has provided successful testimony in Massachusetts State Court and in Pennsylvania Federal District Court. Sad to say, but they have completely lost their minds and are offering nothing more than a grave disservice to the constituents they claim to serve. 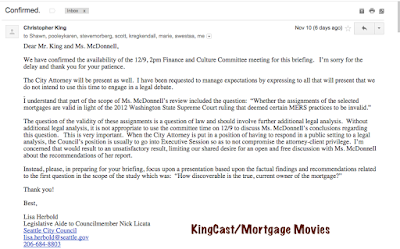 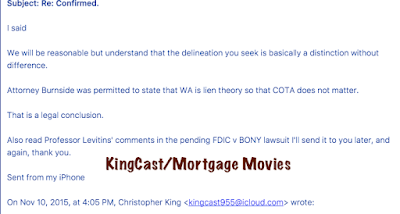 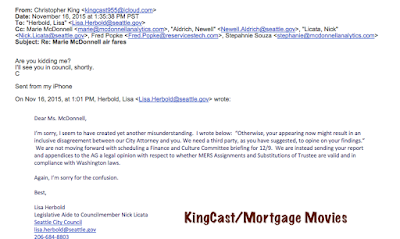 Well folks, sadly the plot thickens. There are certain elements within City Hall who claim to honestly believe that Ms. McDonnell is not enitled to say the same thing on TV, to City Council and to the taxpayers that she just told the Texas Jury in the $5.4M Jury Verdict (more) foreclosure trial.  For what it's worth, I have had massive problems dealing with Wells Fargo on settling second mortgages and with respect to mediation hearings..... multiple Bad Faith findings, the works.  They are simply horrible.

Further, and with respect to this specific issue, watch the videos above and below and read my public information request regarding the AG Ferguson's choice of Consumer Law Attorneys and continued persecution of Civil Rights and Housing Attorney Scott Stafne at SCRIBD.

6 November 2015 Update:  December 9 2015 was offered by Councilor Licata and accepted by Marie Miller..... next step will be to command Attorneys General Consumer Attorneys and representatives from the Washington State Department of Financial Institutions to be present.  Rumor has it that there is going to be some proposed legislation coming forward as well but I will not confirm or deny such rumors.

In point of fact, just the other day Trustee Rocky MacDonald and had a nice phone interview and he was saying that much of his problem comes from a lack of clear direction from Olympia.  Rocky is a lawyer with a conscience, and we get along just fine because that is how I approached my legal practice and that is how I approach my journalism practice. Let's hope he gets his wish, and stay tuned for that interview coming up 9 Nov. 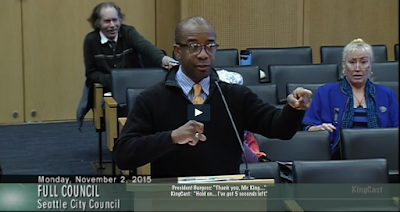 That's Seattle radio personality Susan Harmon on the mic.
Listen to a half-hour with Ms. Harmon, Attorney Stafne and me here. 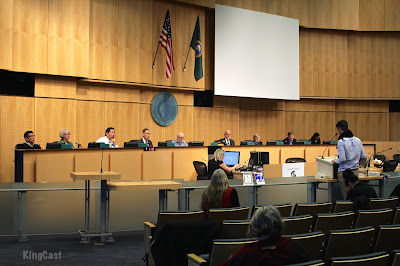 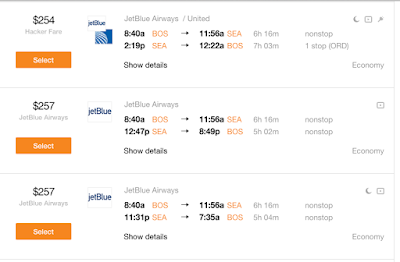 Ladies and Gentlemen, Nick Licata today promised me he would get the ball rolling on getting Ms. McDonnell to Seattle to present her findings on the King County MERS Mortgage Review and Audit. Several of us again spoke today in favor of such a development. Here is your back story on the leaked audit and prior attempts. Order up now folks while fares are dirt cheap: Less than $600 will get Ms. McDonnell and Fred Popke here and back. I told Councilor Licata that's the only reason I am always on the East Coast -- you have to plan ahead to afford it.

Another bystander noted that he said he was going to piss off a lot of bureaucrats but of course eternal vigilance is the price of Freedom. Nick thanks for Doing the Right Thing.

Stay tuned for Details and video from today's event.