That's Lesley Fleming, a lawyer purportedly representing Zurich Insurance at one point in this fiasco. I am corroborating an allegation that she has been removed as Counsel after Plaintiff Bozgoz issued a Complaint about alleged misconduct in the underlying case.

Basically, the family Matriarch sustained a broken neck during a Pierce County para-transit ride, she died shortly thereafter and the family was forced into a lowball settlement. Her daughter is distressed and could not handle the load so she sought help. As U.S. Veterans they fought back and tried to avail themselves of the ADA protections so that Ms. Bozgoz could advocate on behalf of her cousin and Judge Rumbaugh continued to throw my black ass out of Court (just as he had done with white reporter Wally Brown so he is an equal opportunity schmuck) and continued to deny the accommodations necessary for the family to present the case.

We sued Rumbaugh for violating GR 16, the First Amendment and more, but of course the Pierce County Prosecutor's office lied and the Federal Court allowed him to get away with it.  But at least we educated thousands of people about him and his unsavory conduct that is inimical to the State and Federal Constitutions as well as State Statutory and Decisional Law in his own County. He is not Honorable. He's just Stanley. Meanwhile no response from California 9th Circuit on the Complaint filed against Judge Ricardo Martinez, fancy that. 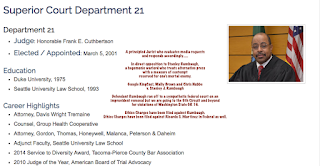 Moreover, Judge Rumbaugh hates cameras in his Courtroom, in direct contravention of Pierce County Judge of the Year Frank Cuthbertson, A Black Man. Now we know why.

63. Forsberg & Umlauf obstructed justice by (1) contacting Margaret Bozgoz on or about 17 December 2016 and informed her that they were filing a motion to strike E Yockmans [with merit] Wrongful Death and Civil Rights case. 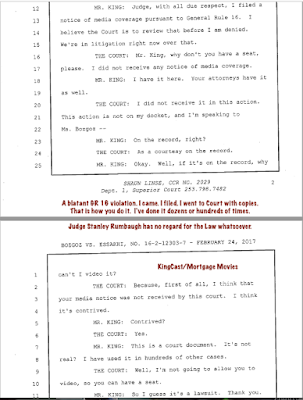 67. The Court lead by Judge Stanley Rumbaugh, Defendants, the Defendants Defense Attorney, Roy Umlauf and Lesley Fleming, Court Reporter Carol Frederick and Court Clerk, Merri Reagan discriminated and abused their authority by coordinating a last-minute hearing on 23 December 2016 at 0900-0915 am then altered court documents to make it appear that Margaret Bozgoz's "Court Call" did not get disconnected during the hearing (Exhibit 16, Order Granting Civil Rights and Wrongful Death Violation/with Prejudice).

70. The Court lead by Judge Stanley Rumbaugh, Defendants, the Defendants Defense Attorney, Roy Umlauf and Lesley Fleming, Court Reporter Carol Frederick and Court Clerk, Merri Reagan discriminated against the Plaintiff by coordinating a last minute 2nd hearing on 23 December 2016 at 0953-10:00 am then falsified court documents for the record (Exhibit 18, Memorandum of Journal Hearing and Exhibit 19, Minutes of Fabricated Hearing by Carol Frederick). These falsified court documents give the appearance that Elda Yockman and Margaret Bozgoz were physically present. However, they were not present.

In Federal Court on the related RICO case the shenanigans continued unabated with Judge Ronald B. Leighton slamming their case after reaching into Seattle Federal Court and yanking it back to Tacoma. Turns out that Lesley Fleming used to work for him. What a dirtbag. Time to have him disbarred.

Damn. I should have put some Gap Band up in there, too late.
Oops, up-side your head, I said oops upside your head....

Anyway, I do slow motion as appropriate, such as these jackbooted Delaware thugs
in my opinion murdering paraplegic Jerry McDole. 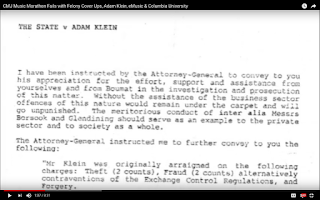 I spent much time in NYC when I lived on the East Coast and still visit from time to time as I have family there. My riding on the Metro Series is here. Along the way I have exposed CMJ Music Chief and Columbia adjunct journalism professor Adam Klein as a convicted felon and "deadbeat dad" according to his daughter. I then discovered that CMJ Music Festival employees also sued him.

But what I have never seen, however, is a racist rant on any of the subways.

I can't wait for the bar to see this.  His words, unfortunately, are protected as much as I love what happened to him.  In my opinion someone should buy Princess Nokia a fresh cup of soup LOL.  I've won First Amendment trials, just sayin'.  But the vexatious and loud manner in which he was saying them, and whether or not he is guilty of public intoxication are valid issues under the doctrinal analysis of time, place, manner.

And if I were a prosecutor, would I prosecute?

Hell to the no. If I stroll into a subway and start calling everyone a bunch of crackers, and hurling racial invective I stand to get my ass thrown out too. But note however that there truly is no reverse equivalent of "nigger" as used by this hateful man.  There. Just. Is. Not.

Speaking of racist white lawyers, Mark W. Rattan and Terry E. Johnson are bigoted white lawyers in Wisconsin. They call me a nigger without explicitly saying so, and that is the focus of my pending bar complaints against both of them after Rattan crossed an entire room and physically attacked me for lawfully running video of a public hearing. Then Johnson -- his lawyer -- allowed Rattan use Johnson's letterhead to lie in Rattan's defense.

Posted by Christopher King at 6:23 AM No comments: