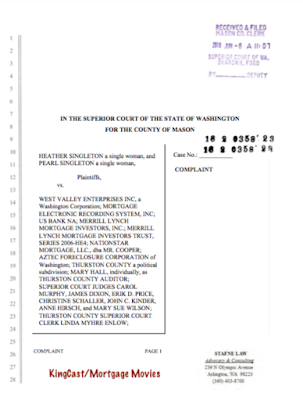 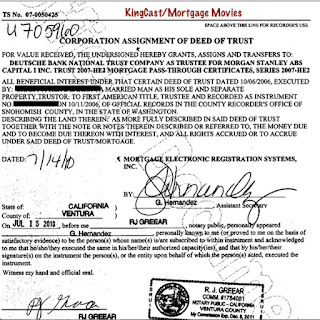 In yet another Select Portfolio debacle we see them dodging regulation interrogatories that allegedly indicate that much of the lending mechanisms behind the entire banking and mortgage infrastructure may be a complete nullity.

This is a long post but you need to read and to digest it all because it is a Game Changer.

I ran video of them losing on Summary Judgment in a foreclosure case three (3) years ago, in 2015. 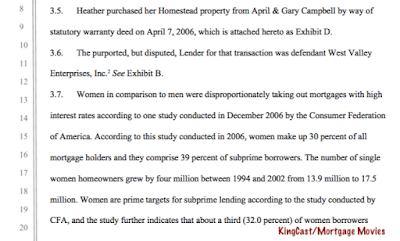 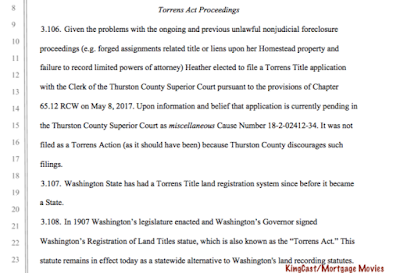 Mind you, this was after their attorneys had filed a specious Removal Notice against Marilynn Shcolnik, a frail, elderly handicapped woman. I was there to document all of it on video (Top video, above).

........much as this case will be a segment on my upcoming TV show. More on this later.

What is at stake here is a fundamental interruption of the way The Game is played. Fast forward three years to 2018 and there are some basics to understand:

I. You can file a Torrens Action in Washington State to Compel the Registry of Deeds to correct errors in your Chain of Title. At least for now. Writes Stafne Law Advocacy and Consulting in a recent Journal Entry:

If you own a home in Washington State, and you want to protect your investment, our recommendation is that you need to take action NOW, before the Washington State Association of County Auditors (WSACA) gets its wish, and they are successful in getting the legislature to repeal RCW 65.12 Registration of Land Titles, or more commonly known as the Torrens Act. Two bills were proposed this past year, HB 2204 and HB 2315, to do just that, and you can be sure that it will be revived again this next year, as it is identified as one of WSACA’s legislative priorities.

There is an existing Complaint filed in Mason this year: Singleton v. West Valley Associates et al. Read it here.

Now we come to the case at bar, which mirrors that of Singleton. It will be filed soon too. The homeowner told me:

"The registrar should really remove [the false encumbrances] on the basis that it is fraud and and there are two state supreme Court cases stating that G. Hernandez was never an employee of MERS and MERS had no authority to assign anything for New Century." (KingCast/Mortgage Movies note: See the purported corporate Assignment dates 15 July 2010 -- the height of the fraud).

Meanwhile New century never assigned the mortgage to anyone else so no one has authority to assign afterwards.....

II.   12 CFR forbids the banks from extending (with exception of local credit unions) from extending credit or loaning money in the states. I have been hearing this lately and it seems so simple but hard to believe but the plain language is right there.

12 CFR 211.6 - Permissible activities of Edge and agreement corporations in the United States.

Yet this is what allegedly has happened in many cases, a few of which I will be watching right here in Washington. The Homeowner writes:

"They evade, ignore and bully. We sent these banking regulations to SPS and they responded saying that they were not a bank so therefore those regulations did not apply to them but they're collecting on behalf of Deutsche Bank (allegedly, we've yet to see anything substantiating that claim) and proceeded to tell us that according to their records our account has been referred to an attorney for legal action and a foreclosure sale is set for June 29th as a means to bully and intimidate but the attorney's office and trustee company they are referring to filed  chapter 7 bankruptcy in April of this year.

Shortly after we received the response from SPS an associate from our attorneys office found a new appointment of successor trustee executed by Deutsche Bank to Quality loan services for them to start foreclosure. Why wouldn't SPS execute the appointment of successor trustee as they've executed the previous three unless it scared the hell out of them? I've sent those same interrogatories to Deutsche Bank and they never responded. Now Quality Loan Services is attempting foreclosure and has served us with a notice of foreclosure before they ever issued a notice of default and have failed to give us 30 days to dispute their claim under the FDCPA and Quality Loan Services from my understanding has already been sanctioned by Washington State AG Ferguson yet they still continue business as usual.

Q: So you have two issues. The 12 CFR issue and the ReconTrust/Chain of Title issue?

"New Century never assigned the mortgage to anyone else and then went bankrupt in April 2007 and went out of business while continuing to take our payments for an additional three months after they filed bankruptcy and MERS cannot assign anything. Especially on behalf of a defunct New Century. We have a copy of an order from the US bankruptcy court that revoked MERS executory power to assign anything on behalf of New Century that was in effect years before this MERS assignment was filed against our property title.

So they had no authority to assign (and definitely not 3 1/2 years later) and then on top of it the MERS assignment was executed by the infamous G. Hernandez who I believe was the subject in the Bain v Metropolitan Mortgage Group and Bradburn v Recontrust cases and who was declared to never have been an employee for MERS as well as the fact that Washington AG Rob McKenna kicked ReconTrust out of the state for unlawful business practices so that in itself should also void any contracts or filings within the state. This whole situation has never been a matter of just not paying our mortgage.

We paid faithfully until we no longer knew who to pay and then after a substantial amount of time passed several servicer's came out of nowhere demanding that we pay them some outrageous amount of money including excess fees and penalties. One of which started foreclosure against us before ever notifying us they were the servicer and we offered to pay but they had tacked on so many penalties there was no way that we could pay the amount they wanted and they refused to take the payments from between New Century and them. The rest of the servicer's alleging claim to our mortgage continued in the same pattern before providing anything to substantiate their claim of ownership. SPS's recent letter stated that we are in default as of March 2012 yet all of the previous correspondence between them and our attorney stated that we were in default from July 2007 and when our prior attorney asked for proof of their advances to the alleged trust they're claiming they are collecting on behalf of they sent correspondence indicating that all of the advances occurred on May 30th of 2017 backdating all the way to 2007 so which is it?

"When we tell our story people always say "wow that is so crazy" but if people truly knew how common our situation really is they wouldn't be so shocked by the details and maybe as a whole we could get some reform passed to where millions of homeowners wouldn't be unlawfully kicked out of their homes. We know a wonderful couple who are going through the same situation. They had the same New Century Mortgage with a MERS assignment years later. Their property has been in the husband's family for over a hundred years and this is where he grew up as a child and it's extremely sentimental to him and they're fighting being evicted from their property that was illegally foreclosed on. We also have a friend from high school who has 3 young children and she's been battling cancer for years and recently lost her home. It's totally heartbreaking "