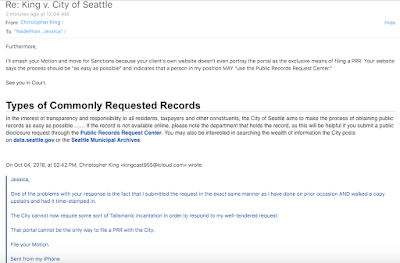 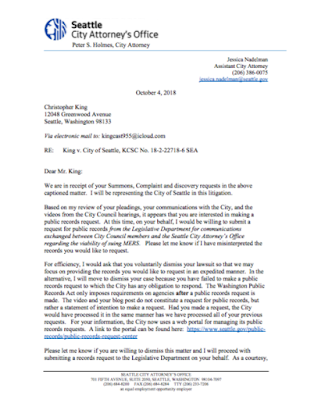 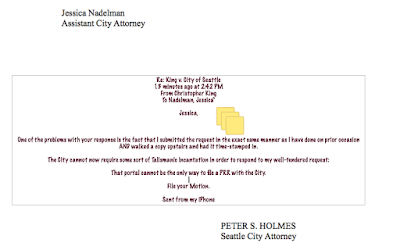 Sooooo.... Jessica Nadelman responded to me today, threatening a Motion to Dismiss because I allegedly only set forth a notice of intent to file a public records request. She says the City now has a portal for filing a PRR. The portal is fine. I'll even use it going forward in conjunction with publicly serving Council.

But for the City to take the position that one can ONLY file a PRR by and through an electronic portal is completely asinine. But it sure would help prevent people without internet access from filing PRR's wouldn't it.

So her response is.... a Falsity:  I orally told City Council I was filing a request, then I tendered one to them in Chambers, and then I walked another copy upstairs and filed it in with a time-stamp. And I sent out an email to City Hall staffers who have responded to my PRRs before on prior occasion, and these PRR's were tendered in the exact same manner as this one. There is simply nothing more a citizen need do in order to perfect a PRR.

Re: King v. City of Seattle
13 minutes ago at 2:42 PM
From Christopher King
To Nadelman, Jessica"

Jessica, One of the problems with your response is the fact that I submitted the request in the exact same manner as I have done on prior occasion AND walked a copy upstairs and had it time-stamped in. The City cannot now require some sort of Talismanic incantation in order to respond to my well-tendered request:

That portal cannot be the only way to file a PRR with the City.
File your Motion.

Sent from my iPhone

Re: The City's frivolous defense to pending PRR litigation.
1 minute ago at 8:49 AM
Lastly, If Defendant were operating in Good Faith it would have advised Plaintiff in his July email to them, or at his recent City Council appearance, that he should file at the portal. They did no such thing. So go ahead and file your Motion, Counselor.

And I will neatly file this email exchange as Appendix A, along with some of my other PRR's filed exactly the same way, along with your client's own stated policy as noted in this exchange.

And I will move for Sanctions for a frivolous response that is thoroughly inconsistent with public policy and the Defendant's own stated goals to "make the process as easy as possible."

City of Seattle Sued for Withholding MERS Lawsuit Information as discussed on 14 September on the Susan Harmon Experience. KKNW 1150am. Direct Link to archives.
Also, Direct Link to Soundcloud version.

All I want are the City's notes on their deliberations relative to why they will or will not sue mortgage industry juggernaut MERS. The City of Seattle has no clue how to help the homeless, initiating then abandoning the so-called "Head Tax." But many of us -- including 12 Counties in Oregon -- have given them a clue: Sue Mortgage Electronic Registration Services. Multnomah County settled for $9M and they are a third of Seattle's size. But alas..... after retaining Marie McDonnell to conduct an audit....

This at the same time that Attorney Lincoln Beauregard sued them for holding an illegal secret meeting before they repealed the Head Tax. See Dori's show on KIRO Radio.

More on Friday as several interested citizens go on air with Susan Harmon. 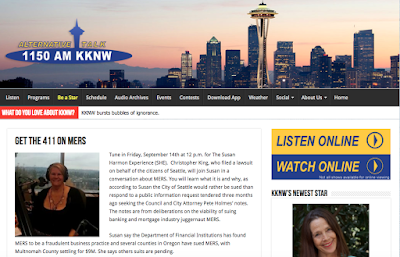 What happened when a complete stranger came to Seattle and witnessed the debacle firsthand?

He put up a challenge for people to directly take responsibility for what the government has thus far failed to properly address. So we all went out after an Urban League and Freedom Project forum and gave of our own clothing and personal items and had a YWCA director offer medical services.

A month later the richest man in the World, Jeff Bezos came out with $2B to fight homelessness.

Find out more about Darrell Jones and The Challenge here.  Watch the video, below.


City of Seattle Sued for Wi... by on Scribd
Posted by Christopher King at 2:45 PM