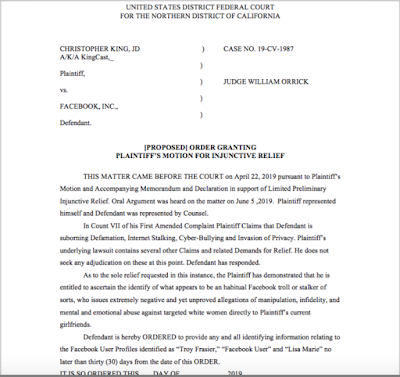 As to the Proposed ORDER: IDK... Just my $.02 but it makes sense, right?
Regardless of how much the Internet mafia hates my black ass, they know I'm CORRECT.
And you had better believe there is an Internet mafia.
That's OK. I've got other resources they don't even know about. But they will.

I told the Deputy Legal Director of the #ACLU, who has recently tweeted supporting the Facebook law firm. No way can she support their position if they refuse to provide the information. That's foul. Slander per se this is. Conduct involving moral turpitude.
You better believe I know my First Amendment-relate Law folks.
Like the back of my hand. They are DONE. I can't wait to get before Judge Orrick.
I am chomping at the bit. They.... are not. I guarantee you this.
Then FB banning all of my blog pages as being in violation of community standards?
Momma, this one's for you honey. I got this.

66. In 2019 Defendant and Counsel in this case again allowed such Defamatory remarks to be leveled against Plaintiff towards his current girlfriend “SW” by two Facebook accounts “Facebook User” and “Lisa Marie”

67. The comments in 2018 and in 2019 all indicate, with certainty devoid of any speculation, that Plaintiff “cheats on all of his women” and "Every single woman that he as dated he has used and mentally abused."…. and goes on to state that Plaintiff seeks out white women as gullible, to use for money etc. etc. ad nauseam, basically every negative racist stereotype of black men in this Fine Country. (See Appendix ______).

68. Plaintiff and “SW” attempted to exhaust all administrative appeals within the Platform structure and Facebook continued to ignore Plaintiff’s Defamation issue and offered a link for “SW” to use that was, and is, nonfunctional.

69. As such, Plaintiff responded: You are playing stupid. Again: I have a VALID CLAIM FOR DEFAMATION ON MY OWN. So you need to give me that goddamn information right now.....


*********
Dear Attorney Spencer: I have notified Facebook Counsel that I will be filing a First Amended Complaint today and a Motion for Limited Injunctive Relief this week for Defamation and Invasion of Privacy. 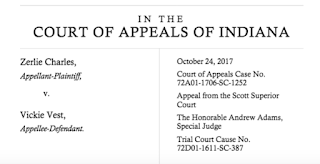 “I’m glad the Court of Appeals recognized that” and chose to reclassify its memorandum decision as a published opinion, Spencer said in a phone interview. While Spencer said he doesn’t use Facebook, he said he believes “defamations occur on Facebook all the time.”

He said he hopes the COA’s ruling and the subsequent award of damages in Charles’ favor sends a message that “you can’t just say anything you want on Facebook and get personal and make statements about other people that aren’t true without running the possibility of getting sued. “A lay person probably feels they have a First Amendment right to say whatever they want to, but that’s definitely not the case if you’re harming people with what you’re saying,” Spencer said.

Even though the case was tried before a small claims court where pleading standards are less stringent, Dattilo said he believes he had a winning case in any forum. He said the circumstances of this case made small claims the proper venue. “I still think the facts of this case could have held up anywhere,” he said. “When you get a reversal and a remand for … a damages hearing, you’ve got something on all fours. … You really appreciate having a fact pattern like this that becomes precedent and will probably help the middle class substantially.”

Coincidentally perhaps, prior to the dawn of the Internet, Plaintiff wrote for the Indianapolis Star immediately prior to admission to, and graduation from, a then top-50 law school, i.e. Case Western Reserve University, where he earned an "A" in Constitutional Law when he studied, under, and clerked for, one Professor Edward Mearns. 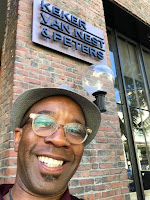 I reported the first set of racist and defamatory messages to my last girlfriend last summer by a Facebook user identified as Troy Frasier. Facebook refused to identify the perp In spite of the fact that Defamation on Facebook is indeed actionable per Dial v. Hammond 15-CV-05383 N. Carolina Buncombe Superior (2015). Case settled for $500,000.00.
******
Next, direct accusations that I use and abuse and take advantage of gullible white women and that I am allegedly always asking for money were repeated again this year by two user profiles (using the same exact language) were leveled at my current girlfriend. Both of these women are white. The writer(s) claim alternately that they were "burned" by Plaintiff and that they warned 3 other girlfriend who were thankful for the warning. I again approached Facebook and got a canned response: 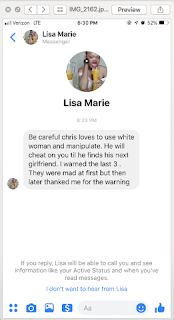 Today
Hi Christopher, We appreciate you taking the time to contact us. You can help your friend or family member by instructing them to report content to us by using the “Report” links located near the content itself. If your friend is blocked from seeing the content, or is not on Facebook, please provide them with a link (URL) to the violating content so that they can include it when they contact us. Please share the following link with you friend to contact us:https://www.facebook.com/help/contact/597132477126770/?ref=cr

Once we get this information from them, we can review the content and take the appropriate action. View updates from your Support Inbox: https://fb.me/1GKxTo0pkVUrUZO
Thanks for understanding,
Riley
********
In response I said: You are playing stupid. Again: I have a VALID CLAIM FOR DEFAMATION ON MY OWN. So you need to give me that goddamn information right now. 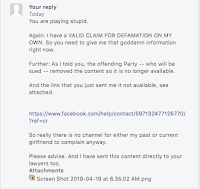 Further: As I told you, the offending Party -- who will be sued -- removed the content so it is no longer available. And the link that you just sent me is not available, see attached.

So really there is no channel for either my past or current girlfriend to complain anyway. Please advise. And I have sent this content directly to your lawyers too.
*********
18 April 2019 Re: Ongoing Issues of Defamation on the Facebook “Platform” Vis a vis Christopher King A/K/A KingCast v. Facebook, Inc. 19-CV-1987

Dear Attorneys Hicks and Thole:
For reasons noted in today’s communication with the Facebook “Help Desk” I will be adding this information to the pending Federal Complaint against your client, who previously IGNORED my concerns about the exact same sort of Defamation last year.

This year I can promise you that any and all of the last three (3) girlfriends in my life who were allegedly warned about me by this poster will come forward to state that they were alarmed by this Defamatory Rhetoric and that it did initially have the intended impact:

It made them leery of me and more accurately feeling vulnerable for prior breaches of trust by OTHER MEN for periods of time ranging from weeks to days to hours. The Rhetoric employed continually references my purportedly predatory acts toward white women, so that is completely racist as well as Defamatory. 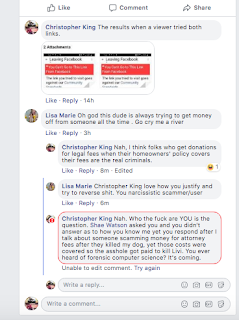 If you do not deliver to me by Close of Business tomorrow 19 April, 2019 a promise to divulge the identifying information on the perpetrators by month’s end I will be folding this matter into the Case at Bar and moving for immediate Injunctive Relief. No one should have to live under this type of racist, defamatory abuse and I will not… nor will any of my past girlfriends or present girlfriend. It’s complete shit.

In fact, she will send a complaint to Facebook within the next 24 hours and will reply on this email chain immediately to confirm her complete agreement that she is harassed and finds the communication to be Defamatory towards me. And you will note that I am not holding your client responsible for the Defamation as that would of course be outside the purview of 47 USC §230, unlike my pending Claims in the case.

Now that I have made myself clear, I look forward to hearing from you in the next 24 hours.

New Facebook Federal Lawsui... by on Scribd
Posted by Christopher King at 10:58 AM No comments: